Attractions - The Castle of Vezio 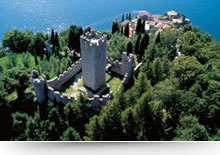 ...By popular tradition the castle was one of the many abodes in Como area in which used to live the beloved Longbard Queen Teodolinda...

For sure, the strategic position of the place has been exploited since the oldest times, supposedly back to the iron - era to which date some items rescued nearby the tower and now preserved at the Archaeological Museum of Como.

In Roman era, there was a watchtower to control the road that from Bellano goes into Esino Valley.

The Medieval tower is 20 mt. high surrounded by thick defensive walls. It was built in the 12th century, probably by the people who escaped from Isola Comacina when it was destroyed 1169, as the historian Paolo Giovio affirms.

At that time, two high walls ran down from the Castle to Varenna, ending with a tower on the lakeshore. In the 18th century, the Castle together with the land around it belonged to the Church of Varenna.

Later it became property of the Sfondratis first, and of the Serbellonis afterwards and also today it is a private property. It has recently been restored and opened to the public.