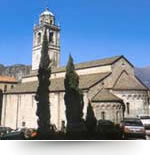 ...The church of San Giacomo was built in the XII Century and was further developed during the baroque era...

The plan consists of three aisles with a bell tower built on the left side of the façade.

From the original building the following structures have been preserved: on the outside, the three chapels decorated by double archivolt archlets and, on the inside, which has a layout with three aisles, the four columns and the Symbols of the Evangelists in the hallway. The bell tower has been further raised and changed during the seventeenth century and was initially a defence tower of the city walls in the most northern part.

On the inside one can find works of art of different historic periods: two Fifteenth Century tables of the Scuola Umbra and of the Scuola Lombarda respectively and several Romanic sculptures, numerous paintings of the late Sixteenth and Seventeenth Centuries (amongst which the “Deposition of Jesus in the Sepulchre” attributed to Perugino and a “Madonna delle Grazie” of the XVI Century attributed to Foppa). Other sacred furniture of considerable importance are the main altar in carved wood and gilded, dating back to the Eighteenth Century, a Romanic crucifix of the XII Century and a Christ laid in the sepulchre dating to the Seventeenth Century. The latter is carried during every Good Friday Procession.