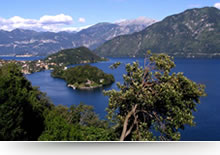 ...The only island in the lake , it can be reached by boat in a few minutes. It is about 600 meters long and has a 2km perimeter...

In 1917, King Albert I of Belgium inherited the island and then donated it to the Italian government. It was successively given to the Accademia di Belle Arti in Milan (Italian National Trust). The island has numerous archeological remains.

In medieval times it was wealthy and populous, so much so that it was know as “the golden city”. Well fortified, the island population sided with Milan during the ten year conflict between Como and Milan (1118-1128). Milan won the war and destroyed Como, but, however, along came Barbarossa who, in turn, destroyed Milan.

The Comaschi, his allies, taking advantage caused by the conqueror (the Milanesi) thirty years before. In 1959 the island was destroyed and the inhabitants fled to the nearby lake shore, though most of them then moved to Varenna on the eastern shore.
The island is today famous for the spectacular Festival of San Giovanni which began in 15th century with the apparition of the saint to a por cloth weaver.

But even more beautiful than the showy pyrotechnics of the fireworks display offered in recent years, is the procession of boats on the lake and the shoreline illumination with their lovely “lumaghitt” lights (snail shells with burning olive oil).