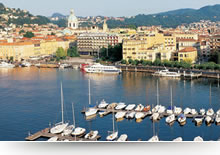 ...In its thousand-year history, Como has been transformed from a fortified village to the town rich in history we see today, where the past and its colourful stories are deeply woven into its urban fabric...

The first aspect which strikes the eye is the unusual manner in which the town embraces the basin of the lake and which gave in the Latin name of “urbs cancrina” (crab-shaped town).

The second aspect is the solid foundations of the Roman and Medieval town sharply contrasting with the latter-day expansion into the surrounding wooded hills, with their sites of pre-historical settlements. A the very heart of the Walled Town is Como’s most impressive monument, the green cupola of the Duomo, an elegant “cathedral on the lake”, which took over four centuries to build.

Alongside is the Broletto, the 13th century site of the town council, with its striking façade in “Musso” marble and multi-coloured stone which ends with the venerable clock tower. Here, in the small square called “Verzario alle Piode”, opened with the demolition of the front section of the Church of San Giacomo, the fish and herb market was held up until the last century.

Walking through the “Vasca” quarter around via Vittorio Emanuele II and its narrow lanes of uninterrupted rows of shops and boutiques, you reach the ancient forum of the Roman town and the Basilica di San Fedele. This is an unusual trefoil-shaped church next to the old grain market. Outside the western walls, the imposing Sanctuary of the Holy Cross rises up before you.

This basilica was built on a place of ill-fame by Pietro da Morrone, the future pope Celestine V, who, according to Dante Alighieri “was guilty of a cowardly refusal” as he was the only Pope to refuse the Papal throne.

Within the Sanctuary the “miraculous” 15th century Cross is displayed, a relic which still today takes centre-place during the solemn Good Friday procession and other sacred rituals in the town. Turning East from piazza Cavour close to what is now the Hotel palace, the Bishop’s private harbour was located, until it was filled in to create the present Episcopal gardens.

But the military docks which formed part of the fortifications erected by the Visconti are still visible. You then pass Como Lake Railway Terminus to reach the “Riva di Brutt” (Shore of the Ugly), which was a part of the “Riva del Voo” (The Ford Shore).

This district around the harbour, was once populated by stevedores, merchants and washerwomen in a great hubbub of goods, boats and wagons drawn by draught animals. Behind this port district I an oasis of peace: the convent church of San Agostino, where the only example of Gothic architecture, with the exception of the naves of the Duomo, is to be found in Como.

Following the lakeside walk, you pass a small square where, since 1894, the Funicular Railway has been operating a panoramic train which climbs up the side of the hill to Brunate.