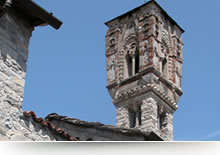 ...This is an area with a rich, historical, artistic and religious heritage. Ossuccio with its many hamlets starts from the shore of Spurano with its theatrical Palazzo della Torre, whose façade with three arches stands out among the small houses lying on he shore...

Here is the Romanesque church of San Giacomo and san Filippo, with its highly sailshaped bell tower and medieval frescoes including a giant San Cristoforo.

Here the roads for pilgrims passed by and this is witnessed by the church of Santa Maria Maddalena ad Ospedaletto, which was an annex of a Medieval hospice for pilgrims and whose gothic-moorish bell tower, which symbolizes the convergence of cultures, is one of the most familiar sights of Lake Como.

The most ancient houses are huddled around the small church of Santa Agata and san Sisinnio, where the name of the original inhabitants the “Ausuciates” can still be read on a pagan altar stone.

On the  northern outskirts of the village is the spectacular Villa of Balbiano (with 15th century origins) with its sumptuously frescoed salons and Italian gardens with waterfalls and rivulets.