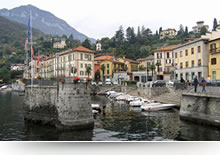 ...Its central position between the town of Como and the northern end of the lake on the intersection of the roads leading to Ceresio, have always made Menaggio a lively tourist place and busy commercial centre...

A beautiful lakeside promenade where the modern Monument to the Weaver stands out surrounded by palms trees and colourful flowerbeds. This busy town, however, has not forgotten its medieval past, which can still be admired in the ruins of the castle and the sculptures which decorate the ancient buildings.

The oldest district extends from the foot to the top of a hill, and it towered by the unusual Spanish belfry of the church of San Carlo.

On the lakeshore, the hotels and newly-built villas have replaced or partially covered the many traces of more ancient times. However, a few examples are still remain untouched, such as the Romanesque quarter of the Fortress and part of the hospice of the Three Kings. Unfortunately, the picturesque railway line to Porlezza has now fallen into disuse.

Once it was used by the tourist and the inhabitants of the valleys who came to Menaggio to sell their vegetables, poultry and, above all, the blocks of ice cut from the small Lake Piano (a marshland important for its fauna which has now become a natural reserve) to the local hotels. The villas are mainly situated at Loveno, and include Villa Govone, Villa D’Azeglio (now Calibi Limentani) and the Villa Vigoni-Myluis and Villa Garovaglio-Rizzi.

Of ancient origins, these villas, which contain many works of art, especially in the Neoclassical style (Thorvaldsen, Pompeo Marchesi) were completely restructed in the 19th century and now form part of a cultural centre owned by German government.

The various churches are divided between four parishes. The most important is the parish church of Santo Stefano, which contains the copy of a Madonna painted by Luini; the original painting (now at the Louvre) was given to the Austrian Governor Firmian in exchange for the magistrate’s court being transferred from Tremezzo to Menaggio.

The façade of the church of Santa Marta, or church of the Crucifix, displays the roman gravestone of Lucio Minicio Exorato (found in the proximity of Santa Maria Rezzonico) who apparently gave the town its name. The church of Nobiallo still has its leaning Romanesque bell tower. Nearby is the route of the Ancient Regina Road, which winds from Nobiallo along the mountain slope to Acquaseria and Rezzonico.