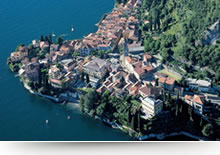 ...On a small beach where the lake plunges into the deeps, Varenna greets us with its pleasant harbour, its rustic houses with suggestive arches and doorways...

The narrow lanes have names such Duke, Innkeeper, Tailor, Weaving Factory… and while this ancient fishing village is today being populated with luxury shops and eating places it still retains its distinctive character.

Further south, among the luxuriant vegetation along the shoreline with its giant agaves, lies the famous Villa Cipressi with its botanical gardens and the Villa Monastero which was once a nunnery with an unsavoury reputation, later converted into one the first “houses of pleasure” on the Lake Como.

In the centre of the village, there are elegant houses like the Palazzo Venini where the “Scanagatta”, Ornitological Museum can be found. There are many churches here, which, apart from their traditional religious importance, also have an artistic value: such as the 17th century Santa Marta and Santa Maria delle Grazie; but the most important of these churches is San Giovanni Battista, which is one of the most ancient churches on Lake Como with origins in the 10th century; and the provostal church of San Giorgio from the XII century.

Apart from their graceful architecture, they also have ancient frescoes (like the enormous Saint Christopher, patron saint of travellers, painted on the façade of San Giorgio and other valuable art works. The village is crowned by the Castle of Vezio, with its remaining tower and section of the walls now restored, and which is situaded on a high ledge from which all three branches of the lake can be seen.

The noble and bloody history of this place which was populated in XII century by refugee from the razing of Comacina Island, is celebrated each year with a distinctive festival. The Val d’Esino offers other attractions like the Museo delle Grigne.

Clearly visible from the lake is the Fiumelatte, a band of white water 250 meter long, active for six months of the year, from the spring to the autumn and which was even described by Leonardo da Vinci in the “Codex Atlantico”. It is also the source of the poetic legend where the Madonna was supposed to have washed the clothes of the baby Jesus.