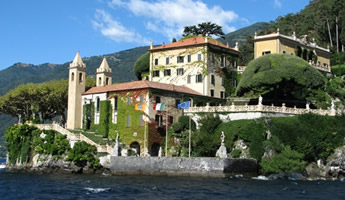 ...Beyond the Perla Torrent is Tremezzina, a sun-filled riviera celebrated for many centuries by writers and poets over the world...

The village of Lenno has very ancient origins, and traditionally it wash here that Plinius had his villa, called “Comoedia”, where he could fish in the lake directly from his window. A hamlet of fishermen and farmers, Lenno has a centuries-old hand-worked olive press which still produces the highest quality olive oil and is said to be the very last in use on Lake Como.

Along the shores of the lake, is a procession of celebrated villas, such as the red “Villa Cassinella” owned by the Mantegazza Family, and the incomparable Villa del Balbianello, built in the 18th century on the promontory of Làvedo by Cardinal Angelo Maria Durini, a highly cultured man, who was already in possession of Villa Balbiano.

He supervised the building of the celebrated three-sectioned loggia with is view over the two inlets on the lake. The wilder of these two inlets he named the “Gulf of Diana” and the gentler he called the “Bosom of Venus”.

Around the loggia there are the library and the music hall. Later it belonged to the american family Ames but in 1974 it was purchased by count Guido Monzino who, in 1988, bequeathed it to the FAI (Italian Ambient Fund).