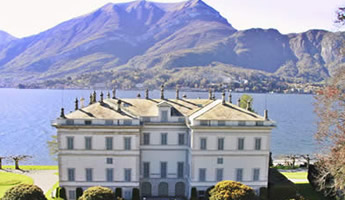 ...Villa Melzi is introduced by its English style garden which develops harmoniously along the lake's banks, the last offshoot in the hill picture of the peninsula of Bellagio, to the south of the inhabited area...

In such surroundings, enriched by monuments, artefacts (amongst which a Venetian gondola transported to Bellagio, expressly desired by Napoleon, and two precious Egyptian statues), rare exotic plants, secular trees, hedges of camellias, groves of azaleas and gigantic rhododendrons, the villa, the chapel and the glass house constitute an extraordinary ensemble in which the neoclassical style reaches one of the highest peaks.

Before getting to the villa, one proceeds along a walkway full of trees, at the shadow of plane trees, trimmed to an umbrella shape to concede the pleasure of a stroll, limiting at times the excessive summer heat. This type of trimming was once a habitual element of the landscapes on the banks of the Lario. As one gets to the big terrace in front of the villa, one can admire the landscape of the centre of the lake and the harmony and the soberness of the building, to which one can get through a picturesque staircase. Four austere lions define the construction space on the sides of the terrace, whilst two marble statues representing Apollo and Meleagro soften the lines. In the building’s surroundings, the space is dominated by the outstanding sculptures of Giovanni Battista Comolli figuring Beatrice who consoles Dante, following the prophesy of exile, indicating to him the higher Justice.

Three neoclassical busts, the central one of which represents Alfieri, adorn the southern part of the villa. Way back, this part was linked by a boardwalk to the terrace in front of the glasshouse situated in the northern part of the building and where way back citrus trees used to grow. Today this building is an independent wing open to the public and converted to museum. It houses old archaeological findings and Napoleonic heirlooms. The chapel, which is situated on the border of the garden next to the Loppia landing place, has the form of a small neoclassic temple and is decorated internally with plastering and paintings by Giuseppe Bossi and by furnishing, amongst which, the Manfredini chandeliers can be highlighted.

The building was constructed between 1815 and 1820 always on the designs by the architect Albertolli with regards to the Directoire style; conserved herein are the Redentore of Comolli; also pertaining to Comolli is the altar’s marble mantle, with the Sacred Family and Saint Anne, whilst the four Angels at the corners are the work of the young Pompeo Marchesi. The decorations in chiaroscuro, the Eterno on the main altar and the Evangelists at the plumes were realized by Angelo Monticelli on a design by Bossi; also pertaining to the latter and similarly conserved are two paintings on cardboards placed at the entrance, the lunette door frame with The Virgin and Child, Saint Bernard and another saint and the Pietà.

Laid on the external wall to the North is the door to the old casa Melzi in Milan, attributed to Bramante, with the family headstone. Opposite the door is a stone decoration dating to 1200 with the symbols of the four evangelists. The villa’s surroundings, which will successively be changed by the D’Annunzio style tastes of the last resident Joséphine Melzi d'Eril Barbò, appeared at the end of the century as still intact, in full respect of the Melzi order. With regards to the decorative aspect, the most important interventions are those by Giuseppe Bossi, who, for the Hall of Honour, had provided the designs for the vault representing the Parnaso and had conceived the four door frames with scenes dedicated to the celebration of a famous member of the family, Francesco Melzi, a student of Leonardo. Represented thereon are the episodes of Leonardo who teaches the study of the folds to the young Melzi; Leonardo teaching how to reproduce a copy from a true picture; Death of Leonardo assisted by Melzi standing up, Melzi next to Leonardo’s bust, dictating the Maestro’s memoirs.

The architectonic building, which overlooks the lake, was built between 1808 and 1815 by the architect Giocondo Albertolli upon a request by Francesco Melzi d'Eril, nominated Duke of Lodi by Napoleon himself and for whom he fulfilled the role of vice-president of the Italian Republic from 1802. From 1805, with the advent of the Italian Kingdom he fulfilled the role of Chancellor of the Empire. Even after his political career, since this was a Melzi residence, the construction, which he wanted as elegant as the Royal Villa of Monza and the other villas situated on the Lake of Como, was decorated and furnished by famous artists of the period: artists Appiani and Bossi, sculptors Canova and Comolli, and the founder Manfredini. He also had a collector’s passion which, on Lake of Como, did not have any rivals except for the figure of Giovan Battista Sommariva, owner of the villa bearing the same name (nowadays villa Carlotta), who, politically defeated by Melzi himself (who was preferred by Napoleon Bonaparte in 1802 as vice-president of the Italian Republic), tried to re-acquire the lost prestige by assembling an extraordinary art collection.

The confirmation of the presence of Bossi in Bellagio in 1815, in relation to the conclusion of the works is certified by a letter dated Milan, 10th January, sent to him by Albertolli, wherein is provided a precise description as to the progress of the decoration works, evidently under the supervision of the latter, specifying the terms of the division of works amongst who had provided the projects, such as Bossi himself, and who had carried out the invention; emerging from this letter is the decisive role for the execution of the decorative setting of the villa of one of Bossi’s students, Carlo Prayer.

On the other hand, the project relating to the garden was created by the agronomist Luigi Villoresi and Luigi Canonica, artificers, amongst other things, of the park of Monza, the organisers of the scenographic setting for the prospective points, privileging once the view of the lake, or the view of the Japanese lake or that of the stroll in the woods.  Several illustrious guests resided at the villa: the Vice-King Eugenio Beauharnais who was a friend and his wife Augusta, the Emperor and the Empress of Austria Ferdinand I and Anna in 1838 accompanied by Prince Metternich and the Empress of Russia Maria Feodorovna. Even Franz Litz was a regular visitor of the park. It is said that during his stay at the villa, in the small Arab style temple, he composed some of his most famous piano pieces, amongst which the “Dante Sonata”.

The splendid view of the centre of the lake and the beauty of the garden and its monuments are described by Stendhal in “Rome, Florence et Naples”, this author being a frequent visitor of the splendid park. Twenty years later, Stendhal will evoke these places in the “Charterhouse of Parma”: Fabrizio del Dongo was born on this lake in the Griante Castle, above Cadenabbia, and his mother, the Countess, spent her youth there. She returned there after the death of her first husband and once more saw these places full of emotion: the Countess accompanied by Fabrizio had wanted to go back to see the enchanting surroundings of Grinta, so much spoken about by the travellers: villa Melzi, on the opposite bank, in front of the castle to which it acts as backdrop thereto; the Bosco degli Sfrondati above it together with the bold promontory which separates the two branches of the lake, that of Como, so voluptuous and the austere one of Lecco…”

The successor to the heirship of the Melzi dynasty was that of the Gallarati Scotti. In fact Ludovico Melzi married Joséphine Barbò, from whom he had two daughters. His favourite daughter married Giancarlo Gallarati Scotti, Prince of Molfetta, and through marriage she brought to the husband’s family even the villa in Bellaggio.