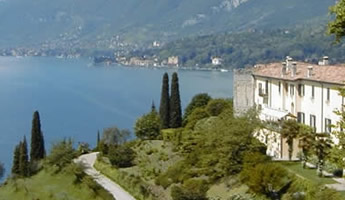 ...On the internal crest of the hill, protected from the winds which blow over the lake, is the building complex of Villa Serbelloni which is characterised by the simplicity of its architectonic lines...

On the inside, elegant halls with vault and coffered ceilings follow one another accurately decorated in the style of the XVII and XVIII century. All around, the park develops along most of the promontory of Bellagio with vast tracts of thick woods where the Serbelloni gardeners had traced paths which nowadays still lead the way amongst the small clearings and English Style gardens.

As noted by Balbiani, rather than a garden, it is the case of a real and true “… wood, opened by spacious and comfortable paths, and plants with all generations of high trunk trees”; amongst which, oak trees, conifers, fir trees, holm oaks, osmanti, myrtles and junipers, "…but above all trees, here situated is the pine tree, which, with its gnarled trunk acts as a screen against the storms”.

ccasionally the vegetation thins out opening on panoramic points which overlook the two branches of the lake, offering a prospective view on the slopes of the hill, where the rose bushes flower during the nice season with their varied colours. The roughness of the rocky plane along the winding path which goes up to the villa has not stopped the construction of terraces and flower beds with yews and boxes trimmed geometrically. Parading towards the upper part of the park is the long row of cypress trees and some palm trees of considerable dimensions.

"We will stop at the villa…, situated in the middle of a wood with tough trees on the steep promontory which separates the two branches of the lake and has the shape of an upside down Y. The trees frame a precipice of 500 feet which falls straight on the lake”: this is Stendhal’s memento of one of the oldest and most enchanting villas of the Lario. Legend narrates that the hill of Bellagio, on which is built villa Serbelloni, was once the frame which acted as background to an old Roman residence which belonged to Pliny the Younger.

It was transformed in a castle during the middle Ages and the building was abandoned very soon to become the nest of bandits who exploited the straddle position between the two branches of the lake. As confirmation of this – in this regard Balbiani writes – we are aware that in 1375 Gio. Galeazzo Visconti, Filippo’s father, ordered the construction of a nice fortress with square stones which rose on the peak, and that it became an infamous shelter for bandits”. Remaining from the original fortress was a great square tower which was successively restructured by Ercole Sfondrati. In the XV Century, the summer residence of known Milanese Humanist was built on the castle’s ruins: Daniele Birago, bishop of Mitilene, commendatory abbot of the abbey of Piona, on the other side of the lake. In 1489, the building and the vast lands surrounding it were ceded to the young Marquis Stanga, treasurer and ambassador of Ludovico il Moro.

He built a sumptuous palace which some years later was destroyed by a terrible fire, maybe arson. During the Sixteenth Century, the ruins of the sumptuous Stanga building were restructured by Francesco and, successively, by Ercole Sfondrati who spent the last years of his life in pious religious passion in the villa. On the picturesque peninsula on which the villa rose, he built the church and the convent of the Capuchins (1614), investing enormous capital in the setting of the park, where in a short time new plants were successively introduced amongst which cypress trees and the Olea fragrans.

In a short while, the whole hill was transformed in a small paradise of lemons, oranges, box trees and bay trees where the paths led to roses, jasmines, pears and pomegranates to great surprise of the visitors: Dionigi Somenzi wrote to Nicolò Sfondrati in 1858 “I will say this of the most magnificent and regal palace which you will find in the middle of the hill – …. perpetual and healthy water in the higher part of the mountain: beautiful gardens which delight themselves with the sweetness of cedars and orange trees; the whole hill ornate and covered with olive trees, figs and fruit trees of all sort and above all vines which produce quantities of generous wine?”. In 1788, the property passed on from the Sfondrati to Alessandro Serbelloni (1745-1826) who furnished its halls with precious decorations and works of art of the XVII and XVIII centuries. In a short while even the surrounding park was enriched with valuable plants (rhodendrons, oleanders, cedar…) which went on to give the villa its present image.

To facilitate the access thereto, Alessandro and Ferdinando Serbelloni commissioned the construction of a road which goes up from the centre of the village winding up through the property. Famous, admired personalities passed from here, such as the Emperor of Austria Francis I and Maria Luigia di Parma; even Tommaso Grossi, Alessandro Manzoni and Giuseppe Parini stopped here for some days. In 1845, Gustave Flaubert mentioned it in the notes of his travelling diary: "…a spectacle made to please the eyes – he wrote – One would want to live and die here". In 1905, it was sold to the Grand Hotel of Bellagio and the property pertaining to the Serbelloni was transformed in a hotel. In 1930, the villa was acquired by an American princess Ella Walker, young bride of the prince Thurn und Taxis, who, upon her death in 1959, give it as donation to the Rockefeller foundation of New York who still manages it to date.