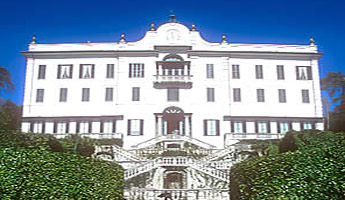 ...3 Star Accommodation at the Hotel Metropole Bellagio. All rooms have breathtaking views of Lake Como and have been recently restored...

Villa Carlotta - Museum and Botanical Garden House, staircaises and garden in Italian style built by Marquis Clerici in the XVIII century, partially modified byCount Sommariva according to the Neoclassical style.

In the Villa you can admire the original forniture and many fine works of art. Landscape garden laid out by the subsequent owners, the Dukes of Sachsen Meiningen. Wide views on the middle of the lake, Bellagio, the Grignas peaks, the Legnone. The building of the Villa was begun in 1690 by the Milanese Marquis Giorgio Clerici (1648 - 1736), an authorative personage at the time of the Spanish and then Austrian domination. The founder of this family was born in 1489 in Domaso, a small town in the north of Lake Como. The Clericis accumulated a great fortune thanks to their long-standing trade of textile merchants.

Their social and economic prestige was then increased through a series of royal grants. The beginning of their wealth was due to the silk merchant and bankier Giorgio Clerici (1575-1660), known as Giorgione. He brought and restored the palace Visconti situated in the S. Protaso district (nowadays known as Clerici avenue) in Milan. His first-born Pietro Antonio (1599-1675) was titled as Marquis. His brother Carlo (1615-1677) inhereted numerous palaces in Milan, in Ninguarda and in Brianza area. These fabolous properties were subsequently inhereted by his son Giorgio II who built the Villa of Tremezzo. In 1717 he was nominated as President of the Senate. Once he died and after the death of his son Carlo Francesco and that of that of his grandson Carlo Giorgio (captain and grandee of spain, fallen in a battle near Belgrade under Eugenio's of Savoia arrays), the 21 years old great-grand son Antonio Giorgio (1715-1768) inhereted the immense fortune of his great-grandfather. The construction of the Villa of Tremezzo was completed.

Antonio Giorgio, a man of great intelligence and generosity, became Baron of Sozzago, Marquis of Cavenago, Knight of the Golden Fleece, milanese patrician and owner of a regiment of infantry. Devoted to the military career, he was General of Artillery in 1746 and lieutenant Marshal in 1755. He was wounded during the campaign against Frederick the great in 1756 and consequently he laid down his arms to embark on the diplomacy. Antonio Giorgio ordered to Tiepolo the frescos depecting "The Fight of the Sun in the Olympus" of the very large ceiling (about 119 square meters) in the residential palace of the Clerici family in Milan. During his intense existence, Antonio Giorgio dissipated the wealth he had inhereted. He died in 1768. The Palace of Milan became the seat of the law-court and nowadays it belongs to the Italian state, while the Villa Simonetta is a music school. Claudia Bigli Clerici, AntonioGiorgio's daughter, was the last of the Clericis to possess the Villa of Tremezzo. She sold it toGiambattista Sommariva in 1801.